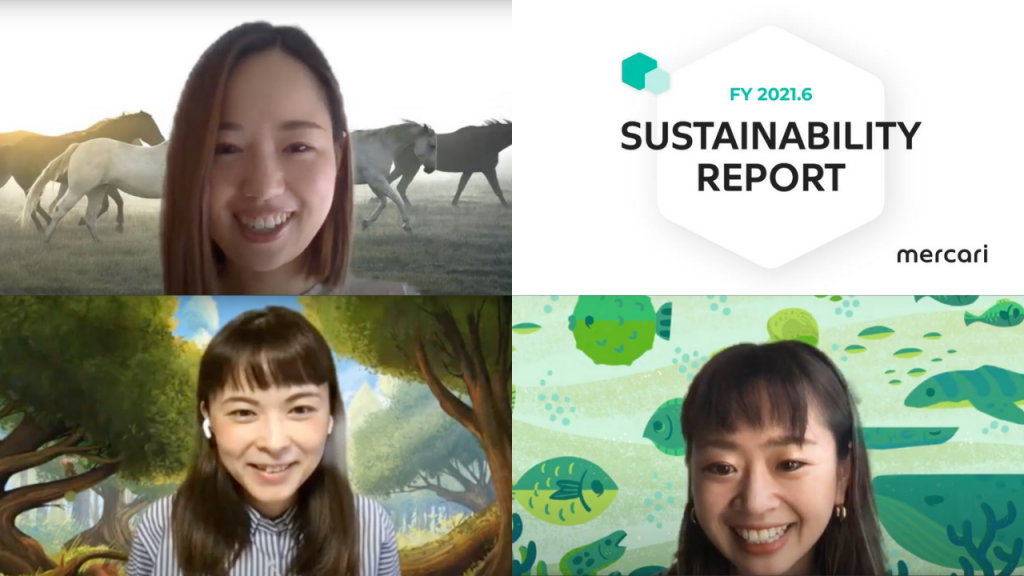 On August 12, 2021, Mercari released the second edition of the company’s Sustainability Report.

For this edition of Mercan, we interviewed team manager Sumika Tabara (@Tabaran) as well as Machiko Yamashita (@mattilda) and Natsumi Ohyama (@natsumi_o), the three members who drove the project to publish our Sustainability Report. In this article, we asked them to share their thoughts on what the report is all about. We also asked them about the seldom-mentioned structure of the team that writes the report and about what went on behind the scenes of releasing the document.

Sustainability Report 2021: Preserving the essence of the report while enriching the content

@Tabaran: That’s right. In 2018, Mercari Group started ESG initiatives as a project run under the direct supervision of what was then called the CEO Office. Then in 2020, two years after the project started, we published the first Mercari Sustainability Report, in which we introduced people to all the initiatives the company had undertaken thus far. To create it, I referred to a variety of ESG guidelines, and from the start I did my utmost to write the report simply instead of trying to cram it too full of information. And actually, at that time I created it largely by myself. This year I was really glad to have more members work with me on the report.

Mercari is taking on ESG initiatives! We discuss the importance of communicating corporate value on a global scale

@Tabaran: To write the report, I looked at a lot of examples put out by other companies. A lot of them were more than 100 pages, and each one took a long time to read through. I of course understood that the reports were that long because there was a lot of information to communicate, but when I wrote our report, Mercari had just started to work on ESG initiatives. So as far as first-time sustainability reports go, I focused on communicating the information simply rather than making it comprehensive.

What’s more, the purpose of ESG is not for the company to show outside parties that Mercari is a good place to invest, but rather it’s an initiative that the company is working on so we can continue to run a sustainable business while coexisting with the rest of society. As a result of us keeping this essence intact, the report Mercari published last year was simple. —The report released last year was 15 pages long, but this year, it was 58 pages.

@Tabaran: Well, previously, in asking our investors about assessing our corporate value, we received some advice about the sort of information we should disclose more of. In the course of speaking with a variety of stakeholders over the past year, we gained a better understanding of the types of questions they had and the sort of content they wanted to know more about. The content for the 2021 report was based on a year of conversations, and in creating the report we also put a lot of thought into the information we published in it. That’s why in this year’s report we not only introduced the initiatives that Mercari has implemented so far, but also showcased content about our basic plans and concrete goals for each material topic and for our targets for the first time ever.

—So you kept the essence of the report while enriching the content. And it was the three of you who were actually involved in creating the report?

@mattilda: That’s right. @natsumi_o got involved in ESG initiatives in July of 2020. And then I transferred onto the team to take part in creating the report when she returned from childcare leave in May of this year.

The process of making a report embodying Mercari in three months

—As one of the members involved in creating the report, what would you say was the hardest part?

@mattilda: There was one item added to our materiality this time around—“Mitigating climate change.” We quantitatively evaluated the environmental impact that our business has, both the positives and the negatives. @natsumi_o and I were involved in calculating the GHGs (greenhouse gases) that Mercari emits due to our business activities. What made that work a challenge was that we had to collect all kinds of different data in a really short amount of time.

@Tabaran: At first we thought that if we had three months, we could assess our GHG emissions quantitatively, but it was a lot tougher than we thought; we needed time to figure out where the data was, time to negotiate with each team in order to collect their data, time to aggregate and analyze the data we had collected, and time to validate the data as well. But in a way, making sure to finish what you start once you get into it is very Mercari (laughs).

@natsumi_o: It’s true that aggregating and explaining the data takes a lot of time, but when we were collecting data for the Kashima and Mercari US businesses, we had a couple of all-for-one moments. We received the data we requested from the two businesses super fast, even though it was the end of the fiscal year, a notoriously busy period.

@mattilda: I feel that explaining to each team why we needed the data that we were requesting from them resulted in people understanding Mercari Group’s efforts on climate change, and it had a secondary effect of spreading knowledge about this topic within the company.

—Did you do the calculations for the data within Mercari?

@natsumi_o: When it came to making calculations, we invited an outside specialist to get expert advice. This was the first time we had calculated data like this, so there were a few places where we were confused by how our business related to emissions. We received expert advice and in the end made decisions that were in compliance with Ministry of the Environment (MET) guidelines and GHG protocols.

—And what about the creation of the report?

@Tabaran: As far as creating the report was concerned, other than the calculation of GHG emissions, we basically started by making the main parts of the report ourselves. We placed a lot of importance on the “Mercari-ness” of the report, so we had a series of discussions on the sort of design that would best represent sustainability at Mercari. Investors overseas were also going to read the report, so when we had it translated we worked with a team within the company to ensure that even the slightest of nuances would not be lost in translation; I really got the feeling that the process of creating the report reflected Mercari’s strengths.

@natsumi_o: Even looking back at that time now, we were frantic (laughs). But this report wasn’t something that just the three of us created. It came together thanks to the cooperation of a lot of different members, including those who created content for each section and checked the design and wording, as well as the company leadership. And anything we feel we could have done better will be applied to next year’s report. —Was there anything about creating the report this year or the work to calculate GHG emissions that left an impression on you?

@Tabaran: There were a lot of different challenges, but personally speaking, what left an impression on me was the process of deciding on targets with the company leadership based on the numbers that we had calculated.

@mattilda: For a time we were attending the Executive Meeting virtually every week.

@Tabaran: Mercari CEO Shintaro Yamada had echoed the sentiment of our company leadership in response to the rough outline targets that we submitted: “Let’s be more aggressive. Are the contents of the constraints really that far out of our reach?” I got a renewed sense of our strong commitment to creating a circular economy and of the strength of our management’s resolve regarding climate change.

—So the commitment doesn’t just come from our members, but also from the strong feelings of the company leadership too.

@mattilda: Yeah, very much so. It’s because of management’s strong commitment (to our values) that we don’t have to explain to them the importance of the initiatives we’re working on or make adjustments to our work in order to justify what we’re doing. We already had a shared understanding of why, so I think that allowed us to focus on discussing the how of the matter.

@natsumi_oo: With regard to our requests to the Mercari US and the Kashima businesses, people were very forthcoming. John Lagerling (CEO of Mercari US) and Fumiaki Koizumi (CEO of Kashima Antlers FC) offered to help us personally and even said that they would speak to people on our behalf if we ran into any troubles. To me, being able to hear from the company leadership every week also motivated me.

—It sounds like the understanding and mindset of the company leadership is reflected in the Sustainability Report.

@Tabaran: ESG initiatives are in essence actions that we undertake for mid- to long-term business growth, so you can’t see the results in the short term. This is precisely why the leadership’s commitment is so important.

—How did the people react to the report after you released it?

@natsumi_o: In the roughly two months after we released the report, it received a huge reaction including 720,000 page views (as of October 31, 2021).

@mattilda: I’m mainly in charge of internal announcements for our members, but I feel like people are interested in what we released. Just the other day, 200 people attended an internal open door meeting (about the report). @Tabaran: There are activities like investor meetings planned for the future, and now that the preliminary information (as contained in the report) has clearly received a substantial update, I would think that the discussions and comments in investor meetings will be even more in depth.

—So before we wrap things up, tell me: What do you want to do next, and what ambitions do you have going forward?

@natsumi_o: As far as the concrete actions described in the latest report are concerned, I don’t want them to stay frozen in the report like a vase in a pretty painting. I want us to move ahead with implementing each action, one at a time. I want to promote things like our switch to electricity powered by renewable energy, which is precisely what I’m in charge of now.

@mattilda: Calculating GHGs is something that we will have to continue doing every year, so I would like to standardize the process.

@Tabaran: If I could bring up one more point, in regard to the climate change initiatives, the financial impact of the chance and risk involved are not linked to our actual management figures, so I would like to work on that. Moreover, I would like to create a way for people to experience sustainability from the design of our products and services.

@mattilda: I also think this is precisely where Mercari’s strengths lie. Going forward, I would like to work while being aware not just of our corporate actions, but of the connections we have to our products.

@natsumi_o: There are a lot of things that I want to do and that I have to do, and I would like to take careful action on each, one at a time.

—I look forward to seeing that. Thank you!