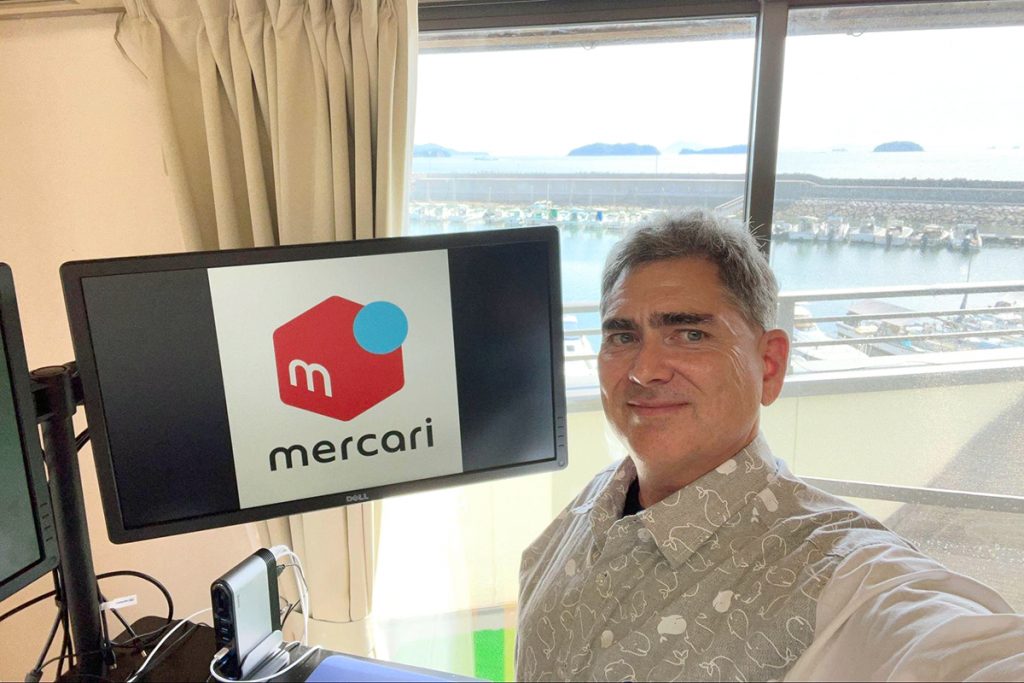 At Mercari, we introduced the “Your Choice” policy to allow each individual and team to choose the working style that enables them to most easily demonstrate the Values, and that leads to the highest performance for themselves/their organization.

A year after its introduction in September 2021, we have started this series of feature articles called “It’s Your Choice” to ask some of our employees who have made the most of the program about their individual working styles and how they view their work. The second member featured in this series is Mike Koenig (@Mike), Product Manager at Mercari. When the pandemic hit, Mike moved from Seattle, USA to Kurashiki City, Okayama Prefecture, his wife’s hometown.

COVID Sparked a Move to Japan

──So, Mike, I heard that you joined Mercari in May of 2022. Where were you working before that?

Mike：I worked in Seattle for about 30 years starting from 1991 when joining Microsoft. I started off on applications, then the first web services, followed by .NET technologies, Robotics, and finally the Office Engineering Platform teams, and Natural Language Experiences team. I have a passion for teaching, and I have taught software engineering topics in the Masters program at Seattle University since 1998. My research area is working with world renowned researchers and teaching hospitals in Africa to build software services to help caregivers detect high levels of jaundice in newborn babies. After leaving Microsoft, I continued to teach at the university while also working on a lot of other projects, including launching a video streaming system startup. Then, in December 2021, I moved to Japan.

──Yes, please tell me about your experience moving to Japan!

Mike：My wife is from the Kojima District (known for the famous Kojima Jeans Street), a harbor town in Kurashiki City, Okayama Prefecture. I met my wife about 35 years ago when we were both still high school students. I visited Kurashiki as part of a sister city student exchange program and that’s when we met.

About five years after that, we got married and started a life together in Seattle. We loved living in Seattle with our kids, but when the pandemic hit in 2020, Seattle went under severe lockdown measures. This was the source of a great deal of anxiety for my wife, and she was worried about her parents back home in Kurashiki as COVID cases in Japan were also on a rapid incline.

I wanted to do what I could to help ease the burden of the pandemic on my wife, so she moved to Japan in 2020 to help take care of her elder parents, and I stayed in Seattle. After two years of living separately, I received my spousal visa approval, and I was able to move to Japan to be together. We now live together with my wife’s parents in Kojima. 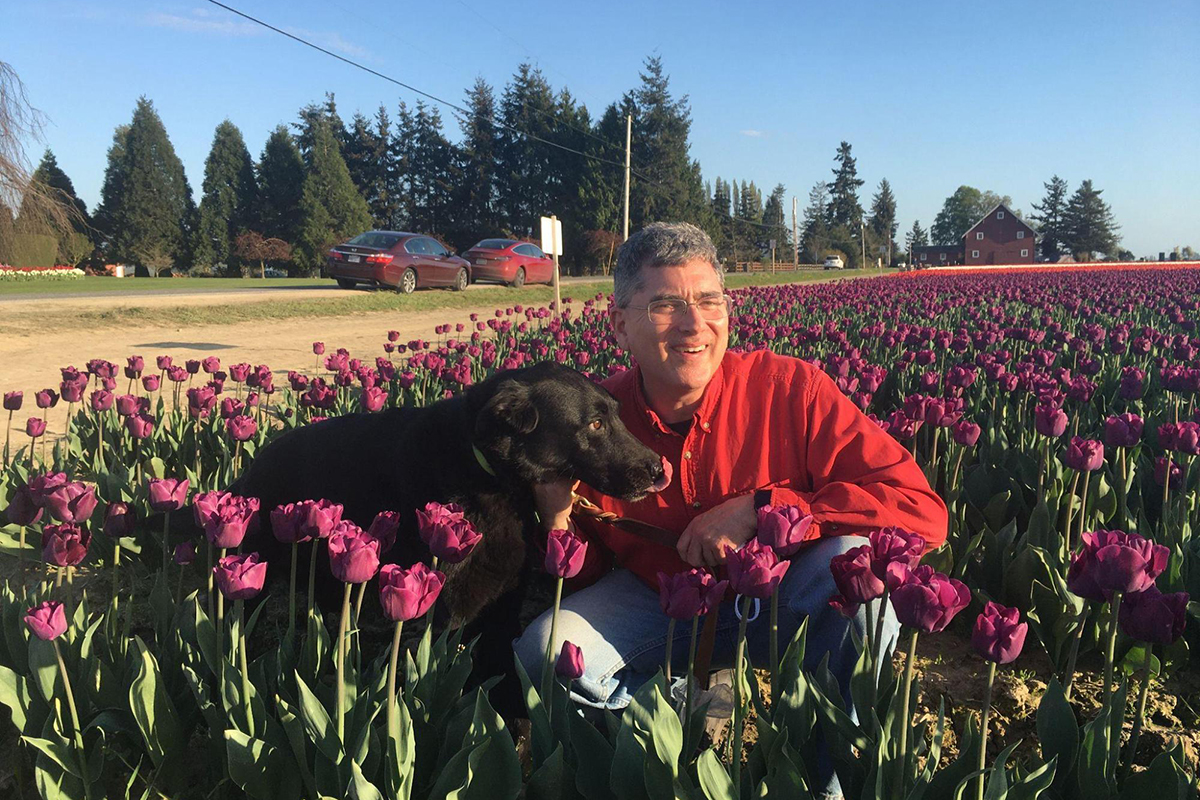 Mike and his dog, in Seattle

Taking on a Bold Mission From a Small Harbor Town

──Sounds like that was a big decision for your family. In the midst of all that, what made you choose Mercari?

Mike：I was introduced to Mercari by @mmiy (Masateru Miyasaka), Director of Products Foundation at Mercari. He was a colleague of mine from my Microsoft days.

If I’m being honest, I wasn’t totally sold on Mercari when he first told me about it. I had actually experienced working in Japan prior to getting married, and I realized then that the Japanese corporate work environment was not for me.

But then, @mmiy told me about how Mercari values diversity and that members of various nationalities work together to achieve the company’s mission—that’s when I became interested.

Your Choice was also a big factor in me choosing Mercari. At Mercari, it would be possible for me to work in the tech industry from the small harbor town of Kojima. That wasn’t all—
I would get a chance to take on the bold challenge of creating a global marketplace. And if all of that wasn’t enough, I was going to be able to do it all from home.

If I had not joined Mercari, I think I would be living a pretty lazy life right now, probably playing around on a boat with all the free time I would have on my hands (laughs). I’m very glad that @mmiy decided to reach out to me about working at Mercari. Picture of Mike from his home balcony

──Playing around on a boat all day doesn’t sound too bad! (laughs) I’m sure that joining Mercari was a relief to your family as well, though. What is it like working remotely from Kojima?

Mike：I have a balcony overlooking the Seto Inland Sea at home, and every morning I step out onto the balcony and wave to the fishermen as they set out from the harbor. After that, I sit down to take on my work for the day—with a nice cup of coffee on one side of me, and a relaxing view of the ocean on the other. There are no words to describe the fulfillment this brings me.

We also get kids from my wife’s side of the family dropping by our home pretty often, and with Your Choice I can take time to play with them during lulls in my work day. I love kids, so being able to do that allows me valuable time to decompress.

I also love getting to talk to other people from the neighborhood. Whenever we pass each other on the street, we say hello and maybe even make a little small talk. I could never have even imagined having this kind of life in Seattle.

My wife and her parents are truly happy that I moved to Japan, and I think that we have Your Choice to thank for that… that’s my opinion anyway (laughs). Now that I think about it, I can just ask her directly—hold on a second I’ll call her over!

──Hello! I’m Suga from the Mercan Editorial Team. Thank you so much for agreeing to be a part of this series!

Mami：Nice to meet you. My name is Masami, please call me Mami, I’m Mike’s wife. Mami was kind enough to participate in this impromptu interview

──Mike was just saying that his whole family was very happy that he had decided to move to Japan, and I was wondering if you could tell me your thoughts on that. Don’t hold back! (laughs)

Mami：Of course I agree! My parents and I are very grateful to him.

Mami：Mike doesn’t speak much Japanese, but he goes out of his way to communicate with my parents and other people in the neighborhood. I’m so happy to see him making an effort like that.

I was also just telling him how grateful I am for his help with my parents—they’re getting on in years and there’s more and more things they can’t do by themselves. I’m also filled with gratitude for Mercari for implementing a system like Your Choice that has allowed our family to have the lifestyle we enjoy.

──It makes me so happy to hear you say that (laughs). Thank you for your time! Mike and Mami enjoying a baseball game; they have both been avid baseball fans since their time in Seattle

──Now that we have talked about some of the good parts of Your Choice, let’s talk a little bit about some areas where Your Choice can improve. What are your thoughts on the current policy?

Mike：I think that Japanese companies have too few days off in the first place. At Microsoft, I had five weeks of vacation on top of our regular paid leave, this allowed employees to refresh themselves, and help prevent burnout. If we’re talking about becoming a global tech company we need to adopt more global standards. Your Choice is already such a great system, I am looking forward to seeing it evolve to the next level.

──I see what you’re saying. This is definitely one of those things where the whole company needs to come together to make things better. So, to close out our interview, could you tell me what Your Choice is to you?

Mike：It’s been about four months since I joined Mercari, and I’m starting to bump into some of the difficulties with remote work. With in-person interactions, to a certain extent you can judge whether what you’re saying is being properly communicated or not just from the other person’s facial expression and by reading the room. Online, this is not so easy.

This was especially true when I first joined the company—I had some communication difficulties because I felt like I wasn’t really getting to know about the other members. For this reason, I have traveled to work at the Tokyo office four times already to get to know my team members better.

Your Choice does not mean “don’t go to the office.” Your Choice was created based on the principle that employees should be free to choose what will work best for them, either to visit the office or not. My personal working style is to mostly do remote work and then sometimes go to the office when I feel it is necessary.

Moving forward, I’d like to continue experimenting with various working styles to find the one that best allows me to demonstrate the Values and have good performance.