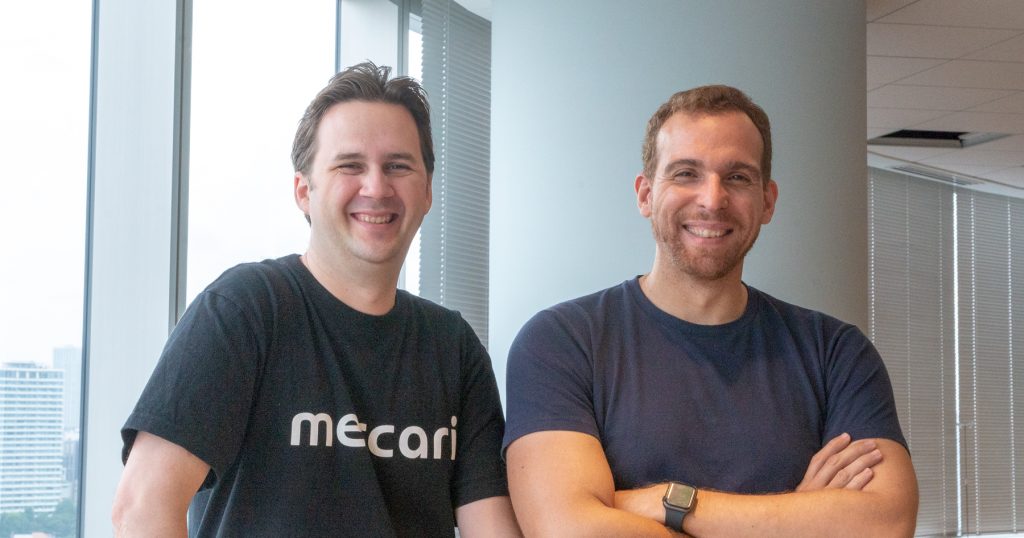 Engineering at Mercari is evolving, and so is our product: Meet our backend engineering managers #WeMakeMercari

Mercari has grown to become Japan’s largest marketplace app, where anyone can buy and sell. However, our journey does not end there. To fulfill our goal of creating a “global marketplace,” we have welcomed talents from all over the world to Mercari’s Tokyo office—around 40 countries and counting.
In the #WeMakeMercari series, we would like to introduce you to some of the members in the company. This time, we sat down with Carlos and Ben, both engineering managers for the Mercari JP Backend Team.

“I was looking for a company where I could continue to grow professionally.” ーWhy did you decide to join Mercari?

Ben：I worked in Japan previously as a freelance engineer, but I moved back to Canada, my home country, to advance my career and move into management. However, I still had the urge to further advance my career and was looking for a company where I could continue to grow professionally. Since I was able to work with multiple startups during my time in Canada, I wanted to work at a company that still had a startup culture. I feel that although Mercari has over 1800 employees, it still has that startup vibe—and also potential for further growth.

Carlos：I’m originally from Spain, but I’ve actually been living in Japan for nine years now, and before joining Mercari I was working at companies that were fully Japanese. This experience definitely allowed me to understand Japanese to a certain extent, but having to communicate 100 percent in Japanese still felt like a hindrance to me. So I was looking for a company with a more international work environment but not completely westernized, as that would defeat the purpose of working in Japan, in my opinion. Then I found Mercari, whose approach combined Japanese and global work culture. With my long experience of working in Japan, I felt that by joining Mercari, I would be able to serve as a bridge, especially for new members who will be joining us from abroad.

“There are lots of opportunities here, and there’s also a lot to be done.” ーBen, you mentioned earlier that the culture at Mercari still resembles that of a startup. Why is that?

Ben：Because the company’s growing so much, there are a lot of chances to set your own path, and there is enough transparency to allow members to do so. For instance, at our all-hands meetings, every single member is entitled to ask questions directly to our execs.

Carlos： That’s definitely true; there are lots of opportunities here, and there’s also a lot to be done. We are currently trying to define the processes to adjust to the growth of the company, which means there are plenty of chances to make meaningful changes in the organization. One of the key roles of an engineering manager at Mercari is to lead and evaluate bold organizational changes for the company as a tech company. We have to define and improve our engineering processes, and ensure that the company provides an environment for engineers to grow and develop their careers.

Ben：Exactly. The Mercari Backend Team is currently migrating from a monolithic PHP architecture to a Golang microservice architecture, all while releasing new features [learn more about this project in this article]. My role is not only to balance the workload of individual members, but also to bring fresh new ideas, talking to project managers and other stakeholders to improve how we develop a product as we shift from a waterfall to an Agile system.

“The company culture is reflected in our product as well. Our marketplace application itself is evolving.” Ben： Also, when we approach problems, our company culture allows us to fail fast. One of the company values is “Go Bold,” and the company encourages people to come up with big, crazy ideas and to not be afraid of failure. I think that’s what makes Mercari’s culture startup-like. It’s rare to see a large corporate company that encourages employees to take a chance, even if that chance were to come with a risk of failure.

Carlos：Yes, I feel that the company culture is reflected in our product as well. Our marketplace application itself is evolving, and we are experimenting with different approaches to find that sweet spot. In order to do that, there is a lot of trial and error. I often hear from engineers I meet at our company events that Mercari is a completed product with not much left to do, but that’s a misconception. Trust me, there are a lot of challenges left to take on.

ーHow would you describe the members at Mercari?

Ben： I think, in general, the members of the company are very open-minded and willing to try new things. People who are a good fit for the company are flexible and are not afraid of change.

Carlos：The people here are motivated to try different approaches, and if it doesn’t end up working out, we try to learn as much as we can from this experience and move on to a new approach.

The migration to microservices is just one of the many exciting things that are currently happening in our Mercari JP Backend Team. There are tons of new features our engineers are working on to make our customers’ experience even better.
Do you want to know more? Reach out to us, and of course, stay updated on Mercan to know more about our future exciting challenges.

Engineering Manager, Backend (Tokyo)
We are looking for someone who can navigate obstacles, negotiate with stakeholders and grow their team members to optimize their output both as individuals and as a team.

Carlos Donderis is currently an engineering manager for Mercari’s JP Backend Team. He has worked in Europe and Latin America, in addition to Tokyo, Japan, where he has spent the past nine years. He has been primarily involved with web- and architecture-related technologies. You can follow him at @CaDs.

Ben Price is currently an engineering manager for Mercari’s JP Backend Team. Originally from Canada, he has lived and worked in Japan for about five years, on and off. Before becoming an engineering manager, Ben was mainly a backend engineer on numerous fintech projects. You can follow him at @BenjaminJPrice.