Hackathon on the Other Side of the World? GOT’s Mikako Discusses the Indian Hiring Project That Won Her Mercari’s 2nd Quarter MVP Award

The other day, I was told out of the blue that I had been awarded the MVP award for the second quarter of this fiscal year. It was a great honor to be selected and, to be completely honest, it took a while for it to feel real. At the ceremony, our COO Fumiaki Koizumi and my boss Hirohisa Tamonoki both offered a few words regarding what they look for in awarding this prize, but their description was roughly as follows:

I wasn’t at all sure how to react to such kind words, but to say the least I was very humbled and honored to have been selected for this prize. 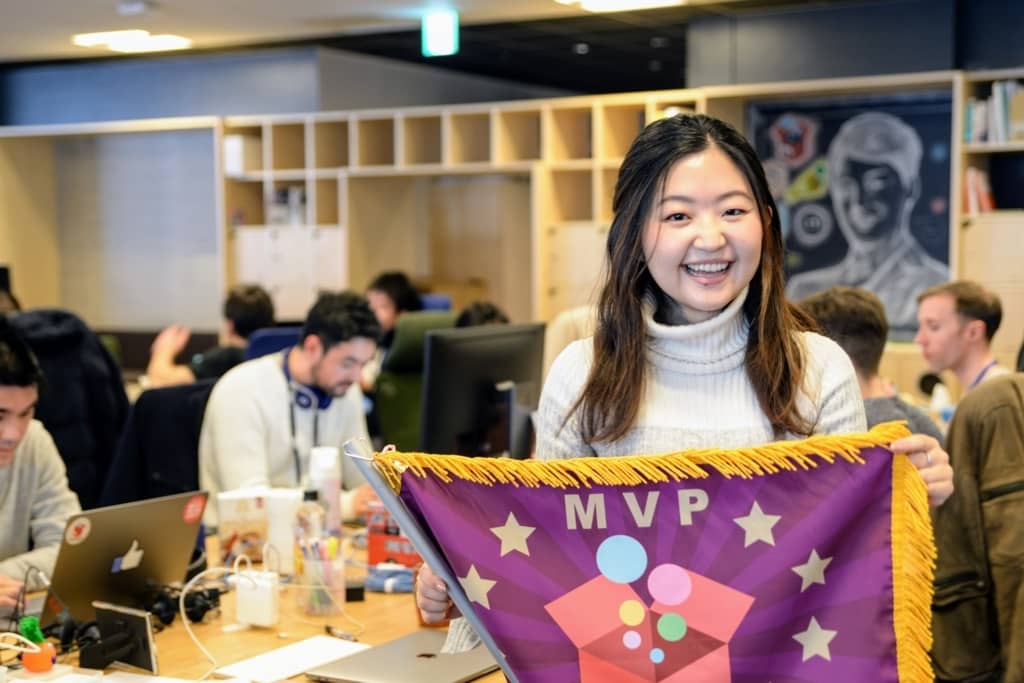 Mercari’s Global Operations Team (GOT) is putting a tremendous amount of energy into global hiring, and we are also continuing our efforts to strengthen the internal onboarding system for new global employees. In this Mercan article, I decided to introduce some of that work and our vision for the future of Mercari.

First, let me start with a brief self introduction. My name is Mikako Tai, and I joined Mercari in May of last year. When I joined, GOT was still known as the “Project Development Coordination Team”, and our primary work was localization of the Mercari app and support for the daily communication needs of global engineers and their Japanese colleagues. For the first couple months after I joined, I was working mainly on the product-side of things, translating Redmine tickets/Wiki articles and interpreting at various meetings and events. My job description now, however, is pretty different.

I still carry out translation and interpretation in support of our global members, but my main work at the moment revolves around Mercari’s global hiring related efforts and in improving the support system for new international employees joining the company.

The story behind how I ended up overseeing the onboarding system for Mercari’s global members is actually kind of funny, but it all started on the first day I joined the company. There was another global member joining Mercari on the same day as me who couldn’t speak Japanese, and I ended up interpreting for him on the spot through the entire orientation process. After this orientation ended, I worked together with a number of different corporate teams to put together a more comprehensive onboarding system for international employees known as “Welcome to Japan”.

In crafting “Welcome to Japan”, we reexamined the entire process that occurs after a new employee officially accepts their offer, ensuring that we take the necessary steps to properly guide them through their first day and provide continued support after they have officially joined. Any number of different corporate teams lent their support to this project, which, beyond simply improving the onboarding flow, also entailed creating entirely new systems from scratch as well.

In this sort of way, my job description came to be less connected with the Mercari product per se, but rather with the supporting of our global members and the establishing of an onboarding system to ensure they could easily integrate with their teams and the company as a whole.

The “Welcome to Japan” project required me to work primarily with teams outside of GOT, and I was in frequent contact with those departments involved in the process of hiring/onboarding new employees. This experience proved to be extremely valuable for my work here at Mercari, as it allowed me to better understand the organizational and systematic challenges facing the company.

In my last job, I served as the “glue” between a number of different departments and was working in a pretty cross-functional manner to increase overall workplace efficiency, so this theme of how to best lead in an international environment was not a new one for me.

In GOT as well, the nature of our team’s work requires that we are in constant contact with other departments throughout the company as we work to support their operations. Besides the different corporate teams I mentioned above, there are a number of other departments that I work with on a consistent basis on the product side of things as well.

My connection with the product team began at the first BPD (internal hackathon) I participated in after joining the company. During the final pitch session, my boss suddenly yelled out “we need live interpreting!” and I was put on the spot and had to interpret in front of a large group of fellow employees. It was a hackathon, so naturally there were a lot of technical terms in the presentations–needless to say, this was a pretty nerve-racking experience for me.

After the presentations however, one coworker joked with me “Tai-chan, can you secretly write Javascript?” and this comment helped me relax a lot. I got through that experience thanks to the kind support of a lot of engineers around me, and as a result I started to get assigned engineering-related interpretation on a more frequent basis. I still remember how struck I was then by the unity and teamwork of Mercari’s product team.

I still do a lot of interpreting today for different engineering teams, and I love the position I find myself in helping to bridge the gap between Mercari’s corporate and product sides.

One of the large reasons I was awarded the MVP title this time around was because of a recent Mercari project to increase our hiring efforts in India.

This project had the full support of our management and also was based around a very concrete goal: in order to create the base for Mercari’s development as a global tech company, we needed to increase the number of international engineers in our organization, and so we decided to go after some of the amazing engineering talent that is present in India.

In classic Mercari style, my involvement with the India project began with a short comment from my boss where he asked me “So, do you want to go to India?” I had been interested in business and economic development in emerging markets ever since my time as a student, and my previous job working in an NPO had inspired a dream of traveling to India in some sort of business role, so I jumped at the opportunity to visit the country with Mercari.

My approach to life has always been to say yes to strange opportunities, but I felt a particular excitement about the chance to be involved with India and the Indian economy.

A number of major Japanese tech companies have been carrying out hiring activities in India for years, but at Mercari, we had to start from the ground up. Everything was an unknown for us, and the only two things we were sure of were that: a) the Indian Institute of Technology (IIT) had tremendous engineering talent; and b) Mercari had zero name recognition in India.

You obviously cannot hire someone who has never heard of your company, so in order to try and secure some of these fabled Indian students, we first had to the face the hurdle of increasing our presence and recognition. After a lot of thinking on the best way to achieve this goal, we decided to carry out a hackathon in Mumbai, inviting some of the best IIT students from around the country and letting them do our PR work for us.

We had nearly 1,500 applicants to the hackathon, out of which we chose 30 top students and flew them out to Mumbai to compete under the theme of “Building a Smart City”. Over the course of two days, these students tackled this problem–designated a main priority of the Indian Ministry of Urban Development– head on, and on the final day they presented the digital solutions they came up with to improve India’s existing infrastructure. Watching these students’ presentations, I was struck not only by the quality of their output, but by their presentation skills and depth of thought as well.

As a result of this Mercari Hackathon, our name recognition among the different IIT campuses shot up sharply, and laid the groundwork for our hiring success later that year.

Looking back on the experience now I remember seeing all of the students posting on social media in real time, and most of them were wearing the t-shirts we handed out at the start of the event. In any number of ways, the hackathon was a great way to go about raising the awareness of Mercari among IIT students.

During the official IIT hiring period in December, Mercari selected around 200 students to interview from an applicant pool of just over 1,300. We traveled to India in three groups composed of members from GOT, HR, and various engineering teams, visiting over five of IIT’s campuses in different cities all across India. Once on the ground at these respective IIT campuses, our three teams interviewed our pre-selected students and, if they passed, made an offer right there on the spot. All in all, we walked away with 32 new hires, far more than we had ever anticipated.

To achieve this sort of success in our first year on the ground entailed any number of different challenges. We had to bring together engineers and management to create a new standard for global hiring, all the while taking care to obey the strict rules set out by IIT regarding hiring activities among their students. It wasn’t always a smooth process either! We sent some banners and other materials to Mumbai for the hackathon, but they never made it through customs and we had to print some out on the ground last minute… The project as a whole was full of unexpected twists and turns, but, at the same time, those unanticipated events were what made it such an exciting endeavor. It was all worth it for me when I heard that, at one of the campuses we visited, Mercari had the highest amount of total applicants among all Japanese companies.

I have nothing but thanks towards all the members who lent their support to this project, which was exhausting both physically and mentally. It’s only thanks to their tremendous commitment that we were able to achieve what we did.

No Precedent, No Problem

Every aspect of this project involved a certain level of grasping about in the dark, but there are a couple points I personally held fast throughout to guide the way:

The above points served as our compass throughout the hiring process, and they continue to guide us today as we prepare to receive our 32 new IIT grads.

I strongly believe that the success of this project has allowed us to take a major step forward in our efforts to globalize Mercari, but there is still plenty of work to be done. Moving forward, we will continue to hire proactively all across the world, but we will also be working to strengthen our internal onboarding system, improve post-orientation training material, provide support in both linguistic and cultural areas, etc.

Here at GOT, we are always looking for problem solvers with the insight necessary to help us support Mercari’s global expansion. If you think you have the skills to join our international and constantly evolving environment, we encourage you to apply via the link below.

From Zero to One: The Story of a New-Grad Product Manager at Mercari

2021-3-5
We created Mercan to bring you all the latest info about the people and events of Mercari. So what are you waiting for? Take a look around!
Follow us:
Share this article 👉
0
0
0