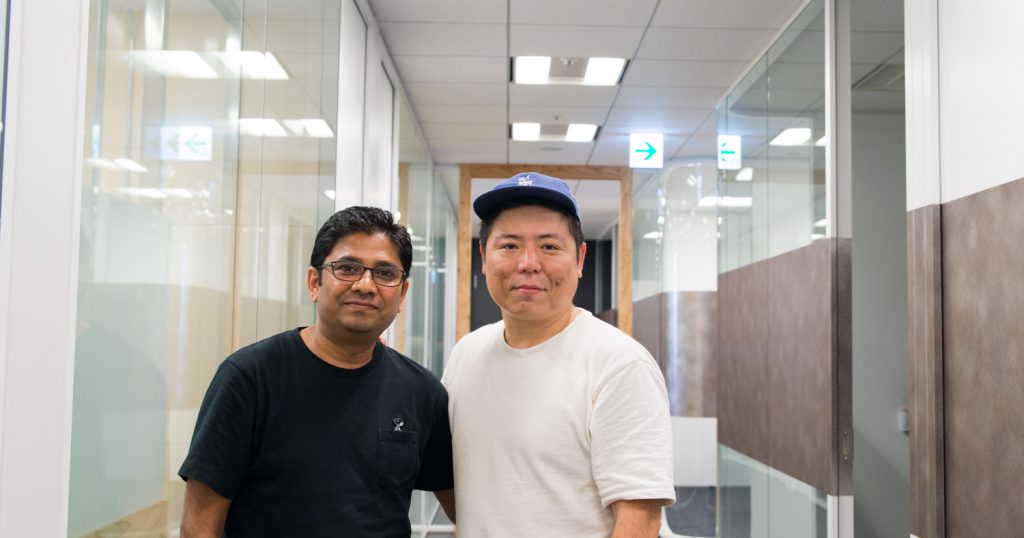 Mercari has grown to become Japan’s largest marketplace app, and we are continuously striving to accomplish our mission to “Create a global marketplace where anyone can buy & sell.” On this journey, our three company values, Go Bold, All for One, and Be a Pro, have always played a fundamental role. Of the three, we believe that Go Bold in particular is a perfect representation of the Mercari culture. To create a large impact on the world, taking on bold challenges and learning from failures is inevitable. In the “Bold Challenge” series on Mercan, we will shine a spotlight on Mercari members who have continued to strive in our evolving environment and reveal why they chose to take on these challenges.

In our third edition, we sat down with Pramendra Gupta, an engineer conducting research and creating mid to long-term strategy for the Mercari product as a member of our Advanced Technology Team. Originally from Nepal, Pramendra is one of the first engineers to have joined us as a non-Japanese speaker, and he has experienced the ups and downs of Mercari post-IPO to our current organization with talents from over 40 countries.
Joining us as the interviewer was Hitoshi Kojima, engineering manager of the Frontend Team and Pramendra’s initial manager when he joined us back in 2017.

I always look for impact in the work that I create, and I’ve always managed to get that here.

Hi, Pramendra. It’s been a while since we were working on the same team. To jump right in, what have you been up to?

Long time no see! I am currently part of the Advanced Technology Team, which concentrates on creating new products and services on a mid- to long-term basis. We do this by conducting research, and discovering new technologies and business practices from around the world to make innovative changes to the Mercari product in the near future. For instance, what would happen to the Mercari product in a world with 5G? How can we incorporate ambient AI technology to improve our customer experience? Our goal is to be ahead of the curve in terms of the latest technology to ensure the success of our businesses. I can say that I’m able to do what I love. 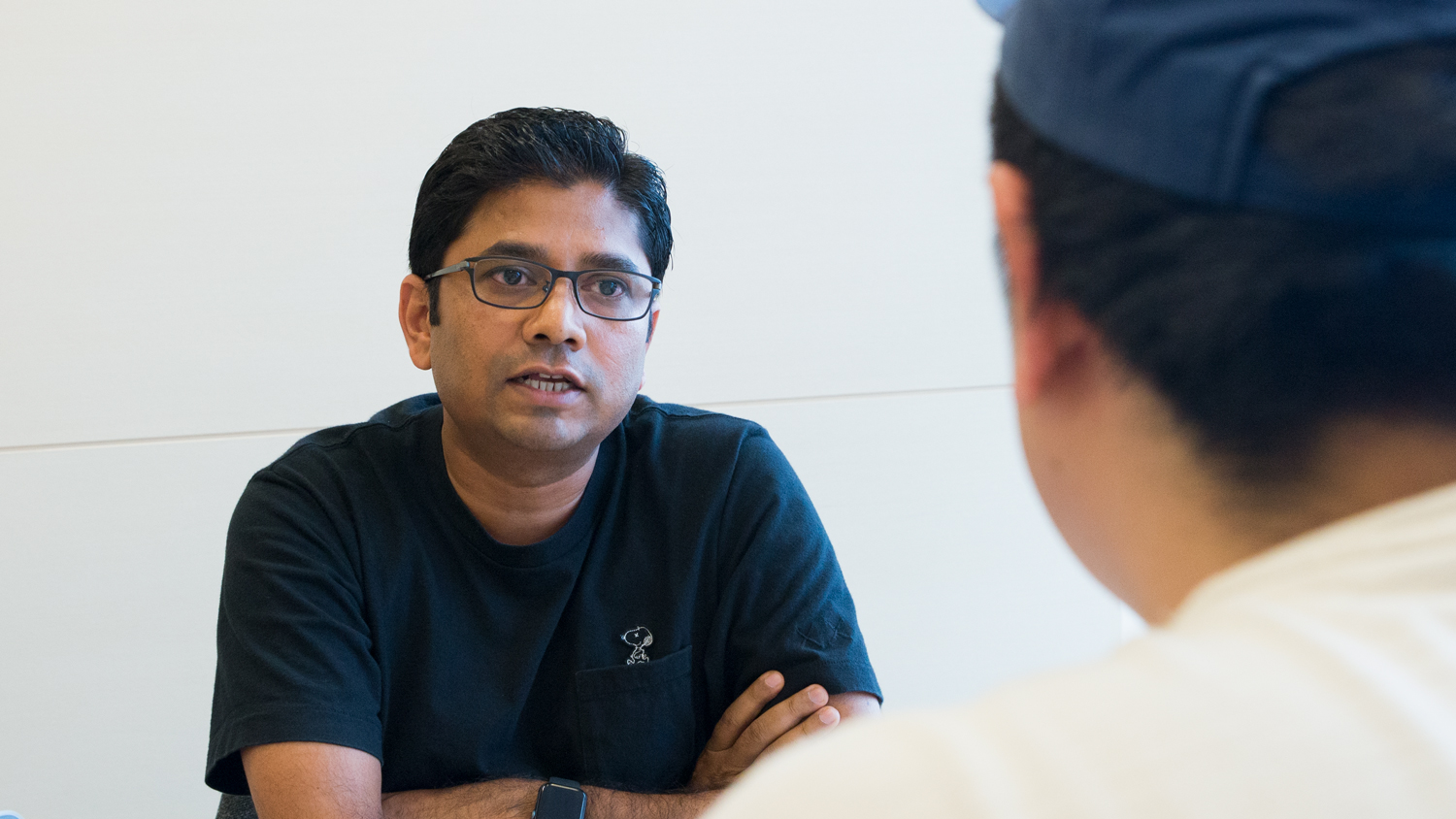 Before joining Advanced Tech, I recall that you were on numerous different teams. How was that experience? Was there a change of mindset through all those teams you have been through?

Yes, as you know I first joined the company as part of the Mercari JP Frontend Team, working on the Japan version of the marketplace app, but from then on it has been a crazy journey, jumping on to different project teams in separate organizations. Looking back on my career at Mercari so far, I remember transferring from the JP Frontend Team to the Mercari US Frontend Team, then back to JP, back to the US, and finally to the Advanced Technology Team. (laughs)
I was actually asked to join the Mercari US Product Team just one week after joining JP.

Wow, how did you feel about having to jump from team to team?

The thing is, every time I am asked to move to a new team or take on a new challenge, the question that I always ask myself is, “Is this the most impactful thing for Mercari’s growth that I can execute with my abilities and passion?” Genuinely speaking, the answer to that question for all the changes I’ve been through at Mercari has always been “Yes.”
No matter what the challenge is, I always look for impact in the work that I create, and I’ve always managed to get that here.

Out of all the experiences on different teams, what would you say was your most challenging project?

The project that I took on when I moved to the US team was a React Native project. That was the most challenging project I have worked on in my career at Mercari so far. During the process, I actually doubted whether it was possible. The architecture of that project was complex; it was required to work seamlessly with the native app.
When I was first told that I would move to a US team, I thought it would be more relaxed, but that was definitely not the case. We were a small team with a very tight deadline, and at that time everything was built from scratch, including the architecture and the native app. React Native itself was not as challenging, but since it was something that was going to be used by millions of our customers, I did not know what to expect, and a lot was beyond my capacity. However, my teammates were extremely supportive and extremely helpful, and with a team effort, the project was a success. I would say that although it was challenging, it was a great learning experience for me.

Our organization is chaotic and at the same time well-established.

After that, you moved back to the Mercari JP team, right? How was the experience of working in a team that primarily spoke Japanese at that time?

To be honest, as you said, not everyone on my team was fluent in English, and I wasn’t fluent in Japanese either. Thankfully, the Global Operations Team (translation and interpretation team) already existed. Since I was one of the very few non-Japanese speakers in the company, I had their full attention, so I did not run into huge problems. Back then I would act as the English teacher in my team, organizing lunches to practice, and then my colleagues would help me with my Japanese. It was kind of like a language exchange.

Yes, I remember seeing a Japanese native speaker talking to you in English and you responding in Japanese. (laughs)

Haha yes, not everything was structured at that time, and I can’t say that there weren’t any language barriers, but everyone was willing to try and communicate with me, and that’s what mattered. Now, as we are a larger organization, the systems in place are more sophisticated in order to support diverse needs.
On the other hand, our engineering side is a bit chaotic, and the product itself is evolving. But I personally enjoy that kind of challenging environment. Our organization is “chaotic” is the sense that we are still evolving and many changes need to be made, but at the same time we are relatively well-established in the sense that we have a support system that allows our members to thrive in this environment.

Motivation is the key element to productivity.

What I learned from working with you is that you are always open to taking on new challenges, whether that’s studying Japanese or learning a new technology. You have always been open-minded, which is a blessing for the company.

Learning completely new things does keep me motivated, but in addition to that, I also have the mindset that if I’m contributing to a product that has huge traffic and impacts a lot of customers, I want to be able to present the best to my customers. This is why I’m always open to learning new technologies and discovering best practices.
Our company is already global in terms of the diversity of our members, but we are still on the road to bringing our level of coding to a top global standard. I believe that is achieved by continuing to bring our best in each of the individual processes. We have the potential to become a truly global company, and the fact that I can be involved in this difficult but exciting journey is the source of my motivation.

We have both seen our organization grow over the past couple of years, but from your point of view, what else do you think has changed?

Increasing the number of members means that there are more people you need to convince. When I was working on a small team, we were highly agile in iterating and implementing ideas with quicker feedback.

Now we already have made a bigger impact on society, and looking to go further as a larger organization, we need to take a step back and understand the big picture. We need to ask ourselves, “What is the roadmap? How are we going to maintain it? How is it going to fit the overall architecture?” In my opinion, the level of professionalism that is expected of members has become much higher.

There are always pros and cons of working in a larger team, and everyone has their own preferences. In my opinion, working in a larger team gives the valuable experience of being able to receive feedback from several experts, allowing you to refine your project as much as possible. Like I mentioned earlier, if I’m contributing to a product that has heavy traffic and impacts a lot of customers, I want to be able to present the best to my customers with the latest technology.

I see. I think maintaining productivity is a challenge that many tech companies have. What’s your opinion on that?

I think the first step of maintaining productivity is the architecture. If the architecture is well thought and built, everything else goes smoothly. But besides that, I believe that motivation is extremely important, and to do that I personally think that it’s important to be the “human in the team.”

Sometimes, not every single team member has the same opinion in terms of technical stack, architecture, and practices. There are always occasions where you have to agree to disagree, but once you make a decision, you are expected to commit to it. If your motivation is only coding, you will not be that productive as a team member. However, if you are able to respect your teammates, not just as your colleagues but as friends, there will always be a team effort to make a successful team, and in turn, individual members can experience success. I think momentum and productivity always come from motivation, and I hope that we are able to keep that no matter how much the company grows in the future.

Pramendra joined Fast Retailing Co., Ltd. in 2013, where he worked on launching new services for Uniqlo Japan, including e-commerce, CMS, and O2O services. He joined Mercari in January 2017, and after leading development of the US version of Mercari Web and the React Native app, he now works in the Advanced Technology Team.

Ever wondered what it is like to contribute to the development of Japan’s largest marketplace app? Welcome to Mercari Open House for Global engineers! This event gives you an overview of Mercari and its engineering organization, as well as presentation of the future of the Mercari engineering organization from our CTO Namura Suguru.