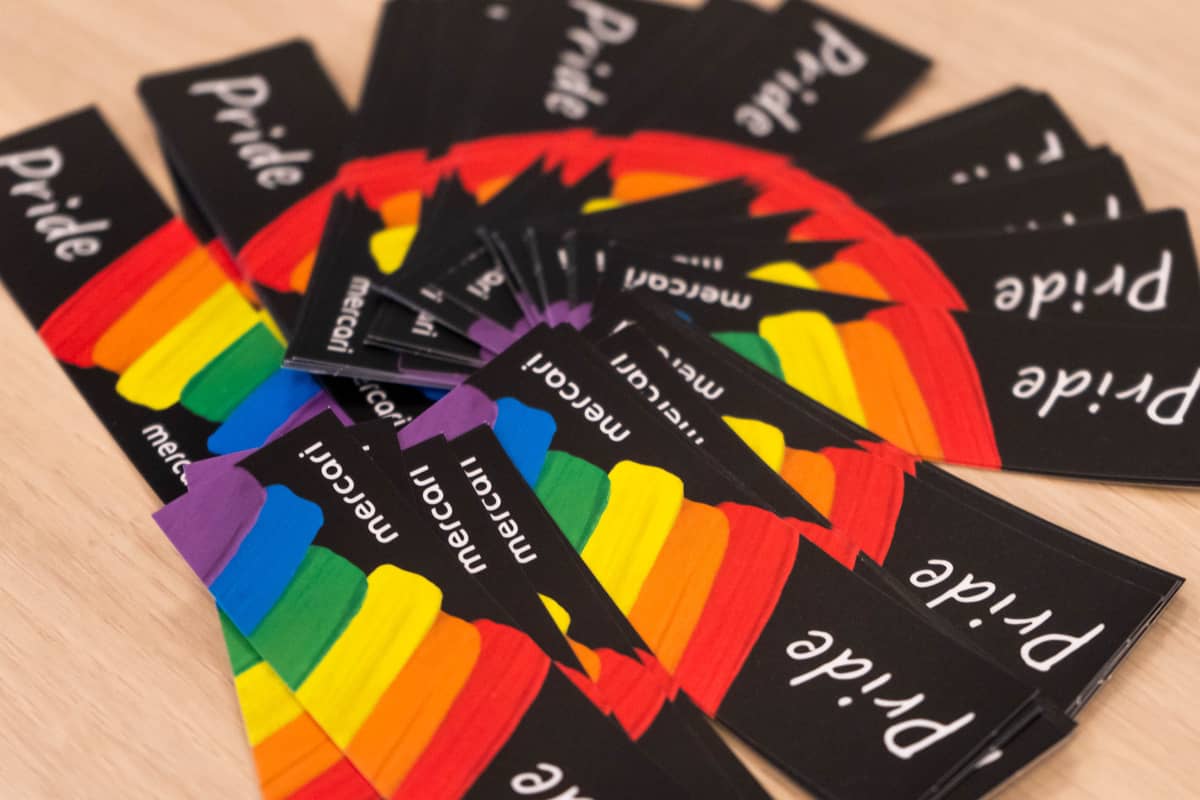 If you walk around the Mercari Tokyo office, you will see members with rainbow stickers on their laptops.
At the Mercari office, we have tons of Mercari stickers for our employees and guests, but this sticker in particular holds a special meaning. The sticker, with the symbol of the LGBT+ community, is actually an Ally sticker that helps members inform others that they are an LGBT+ ally. An ally is a term used to describe someone who supports or is an advocate of the LGBT+ community.

The Ally sticker was created as part of a project for the Diversity and Inclusion (D&I) team. Although D&I is now an official team that is part of the organization, when this project first started, D&I was a volunteer team formed from members of different divisions and teams. Today we would like to ask Suzumari and Lain, who were part of this volunteer team and are still heavily involved in D&I initiatives, about the story behind creating this sticker.

The idea was first raised almost one year ago

Creating a sticker might seem like a simple idea but it actually took the team almost a full year to go through with it. The idea first came up when the members of the D&I team attended a LGBT Ally summit. Through the summit, Suzumari came up with the idea to create company swag that would raise awareness of LGBT+, and help members inform others they are an LGBT+ ally as an initiative to create a welcoming company environment .

Since a lot of Mercari members decorate their laptops with stickers, if we had a design for LGBT+ allies, it would be a good way to attract attention.
However, creating a sticker that also serves as a statement was not easy for a team of volunteer members. Although the idea was always there, it was hard to get it up and running.

Around one year has passed since the D&I team started from a group of volunteers, and now they are an official team. During this past year the members have steadily coordinated projects to further accelerate D&I, raising awareness and understanding within the company.
As an initiative supporting LGBT+, the team held a seminar for employees with a panel discussion of members who are part of the LGBT+ community themselves.
It was at this time when the idea of creating a sticker was proposed once again. This time, since the team had become an official project team, and the company was ready to mark the official start of D&I, communications within company went smoothly.

The idea finally became a reality, and the stickers were first presented at this event. Many members, after directly hearing from Mercari’s LGBT+ community, left the seminar with an Ally sticker on their laptop.
Almost all of the 500 stickers that were initially made were claimed in the span of two days. We even shipped some to our Palo Alto and Portland offices from Tokyo!

Lain and Suzumari both mentioned that D&I initiatives have rapidly accelerated change over the past year. When asked about the intention behind creating the sticker and their future goals regarding D&I at Mercari, they mentioned:

Lain: In creating this sticker, I wanted to advocate for Mercari members to be allies by intentionally creating an item that allows people to make a visual statement. Moreover, I wanted members of the company to know more about LGBT+. In the future, I personally want to contribute to not only raising awareness but helping to build systems to improve the work environment.
Suzumari: Although it took us one year, I’m very glad that we were able to go forward with these initiatives. By continuing to raise our voices I feel that the company as a whole changed in a positive way.
I want to continue to raise the unheard voices of minorities, and I want to continue Mercari’s D&I initiatives as a company.

To create an environment where everyone and anyone can work comfortably—This is only the starting point of our LGBT+ and other D&I related initiatives. Please stay tuned for what comes next!

2020-1-28
We created Mercan to bring you all the latest info about the people and events of Mercari. So what are you waiting for? Take a look around!
Follow us:
Share this article 👉
0
0
0